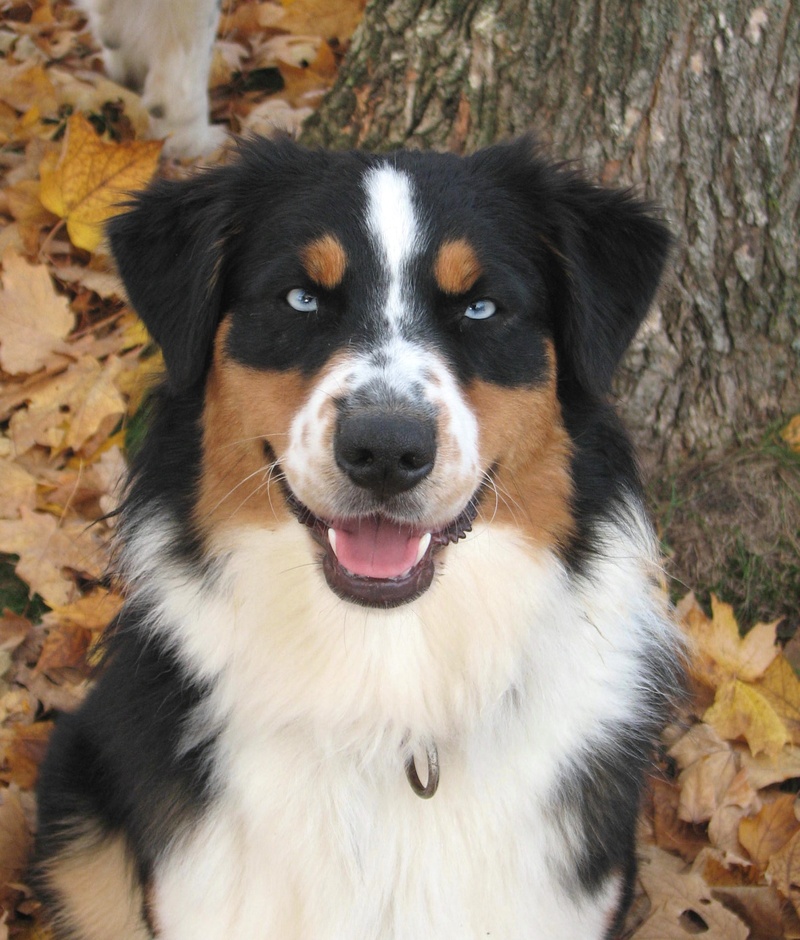 Okay, I held off making this page as I didn't want to make a big deal out of something like eye color. But the more I see of the "fad" of breeding solely for traits like eye color, size, markings or a single other more superficial trait, the more I am disturbed by it.  When breeders fall to breeding solely for a fad, be it for what is winning in the show ring (such as huge coats or bone), just to sell more puppies for more money, or for any other cosmetic reason, the bloodlines suffer.  If enough do it, the breed suffers.  Many of the breeders who focus solely on that trait will call it the "BET" trait or "BET lines" with "BET" meaning blue-eyed tri.  That is the focus of their breeding goals.  I cringe at that.
With something like the "blue-eyed tri" trait, I have followed the fad for many years.  And while you may see some of my dogs have that trait, I can assure you they were not chosen solely for it. Instead, they were chosen for their good temperaments, structure and type, and health. Yes, I do find it appealing as it is very striking. But the total dog must be considered if a breeder is really a good steward of the breed and the bloodlines he or she works with.  For me, I evaluate the whole dog and color and markings are lower on the list, as long as they fall within what is acceptable by the standard (meaning I wouldn't consider breeding a dog with a major color fault or mismark).  I want a solid and sound temperament, since these dogs are my constant companions and puppies I sell become that for their new owners. I want good health so I do a lot of health testing on my dogs, including OFA for hips and elbows, annual CERF exams for eyes, MDR1 testing for the mutation that can cause serious and even fatal reactions to a number of medicines and drugs, and the HSF4 hereditary cataract mutation.  I also study pedigrees and bloodlines for the traits they carry, good or bad in health, temperament and even structure.  I also have educated myself well on the breed standard and structure and movement, as well as breed type.  Any good breeder will have done these things. I think it's important to try to breed for good temperaments, good health AND good quality in terms of type, structure and movement.  I ask a lot of questions of those who have been in the breed longer than I and am thankful for knowledgeable and honest mentors who put the breed's welfare over ego or financial gain.  It helps us avoid breeding dogs who have a higher chance of producing genetic defects or even unsound temperaments.
I guess I am just saddened to see so many breeders now breeding for something like "blue-eyed" dogs over all other traits.  Some are big volume breeders with dozens or more dogs, some just breed anything that is blue-eyed and don't worry about any other qualities or health testing, and only a rare few actually seem to be working toward sound and healthy dogs who also carry that or other physical traits they find appealing.  Some of those volume or "blue-eyed" breeders also charge thousands of dollars for a puppy that may not even be from sound parents. (By sound I mean physically and mentally, having good temperaments.) That can mean puppy buyers pay a lot of money for puppies that may have challenging personalities or inherited health problems.  It's not that blue eyed dogs have a higher incidence of such things, but that some lines that carry that trait may also have those issues.  So if a breeder is not assessing the WHOLE dog, only breeding it because it's blue eyed, they may also be producing puppies who have less than ideal qualities in other areas.

So I urge you as a prospective puppy buyer to always do your research into any breeder you consider buying from.  Make sure they really are doing the best they can for the breed and the dogs.  It is best not to just pick a puppy based on one physical quality.  Ask to see copies of health testing and to meet the dogs in person, and see how they react and interact with other dogs and people. Ask how the dogs are out in public and in new situations away from familiar environments.  Dogs who live in kennels all their lives may adjust there and seem okay,  but not have sound temperaments to be able to function out in public.  Ask why a particular breeding was done, what the good and bad qualities in each parent was and what the breeder hoped to accomplish with the breeding.  A good breeder can answer all those questions thoroughly.  If they tell you they just wanted to produce a lot of blue-eyed puppies to sell and that was the only reason, it may be wise to keep shopping.  If they routinely price their "BET" puppies higher than brown eyed littermates, that's a huge clue as to the focus of their program and I would avoid them.   I know from first hand experience that some of the lines that carry this trait also carry health and temperament problems.  You CAN get healthy, sound dogs with this trait though, so just shop wisely and take your time making a decision.

Okay, enough of the serious stuff.  I thought I would explain to the new Aussie fancier a little about this interesting trait.  It is a recessive, though not a simple dominant/recessive trait.  I have seen blue eyes come from brown-eyed parents in this and other breeds such as the Siberian Husky, and two blue eyed parents can produce brown eyed offspring.  Since I find color genetics fascinating, I have tracked this genetic trait along with  many others I am interested in (such as those for various color traits, as well as traits for behavior and structural qualities.)  In the general population of Aussies, having blue-eyed solid dogs (tricolor, bicolor or self colored solid dogs) is pretty rare.  You may see hundreds of brown-eyed tri pups before finding a blue-eyed tri one. In lines that carry it the trait does reproduce somewhat reliably so it will seem less rare.  (And of course with the dozens of "BET" breeders cranking out pups, it's not rare any more anyway.)  Some bloodlines seem to be very strong for the trait, and others seem to have it occur a lot more sporadically and it may show up only every few generations.  Brown-eyed relatives of blue-eyed tri dogs could produce the trait, but not nearly as regularly or reliably as their blue-eyed relatives.
As with any single physical trait, it is just a small part of the big picture of what makes up this amazing breed. Don't forget to keep that in mind.  A good Aussie can come in any color! 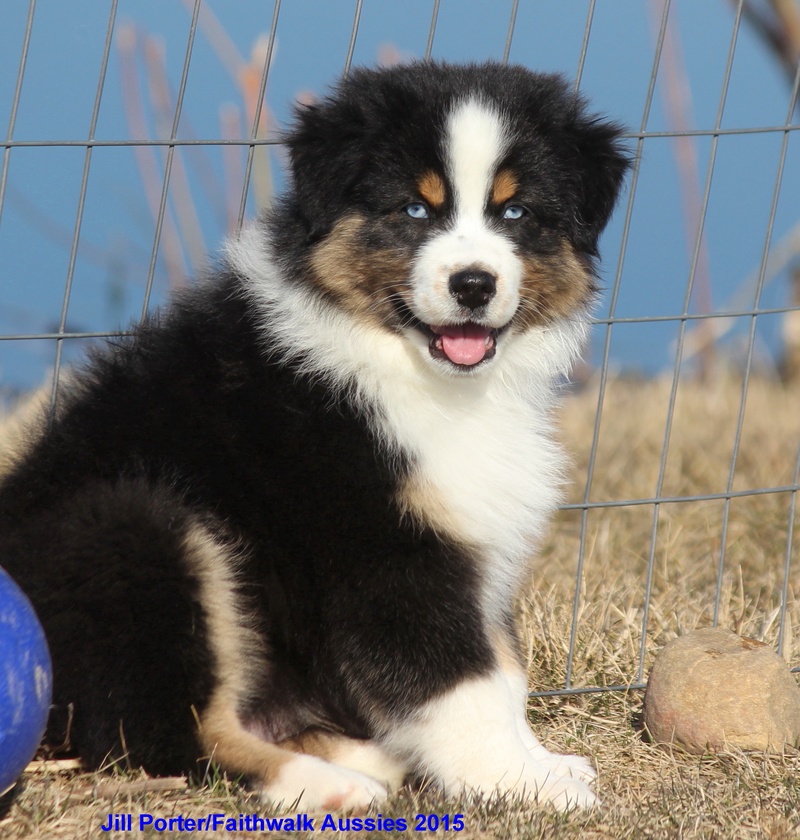 (Jesus said) "Whoever acknowledges Me before men, I will also acknowledge him before My Father in heaven."