What You Should Know About Vaccinations

"We are counting on you to make informed decisions and keep us safe and healthy."

"What you don't know could kill your dog"

Because I am contact with many pet owners and have been for decades, I hear more stories than the average pet owner.  Many of these stories involve declining health and/or developing behavior problems, Because I love animals and want the best for them and their owners, as well as for my own dogs, I am constantly reading and researching all topics pertaining to that.  One of the biggest issues I see today is the rampant over vaccination of companion animals, and one of my missions in life is to get that information out there to pet owners.  Over-vaccination can cause serious and even fatal health problems as well as striking changes in behavior.

No, I am not a veterinarian, but I AM an educated, thoughtful pet owner who can read and think critically, as well as talk to countless others who have owned pets for decades.  Combine that with the countless observations I have made over the years, and I have formed some pretty strong opinions on this subject.  I am not alone, but join thousands and thousands of other concerned pet owners in questioning what is going on in conventional companion animal medicine.

I just got permission from one such owner, who recently lost her beloved Rough Collie Duncan, after he got one too many vaccinations which sent his immune system over the edge.   Here is her story.  Below that are photos of him before and after.

As you read this story, remember that ALL vaccine labels indicate they should only be used on animals that are totally healthy, but so many times that is ignored by the very people who are supposed to be trained in this area, the vets!

Duncan came to us as a 14 wk. old AKC rough collie puppy. I had done extensive research into the health of his breed, and of the dogs from his breeder?s lineage and felt confident that he was healthy and robust. Our problems began at the age of 6 months when he developed periods of explosive diarrhea for several days at a time. It took us nearly 2 years of testing and experimenting to discover he had a sensitivity to wheat, corn and dairy, additives and colorings in his food. My husband finally hit upon the perfect combination of holistic dog food and, after talking to the people at Shirley?s Wellness Café, we changed his drinking water to bottled spring water. The diarrhea stopped immediately and from then on our Duncan was happy, healthy, and energetic.


We knew collies to be particularly sensitive to drugs and now that we knew Duncan was also sensitive to food, we wanted to keep him as minimally vaccinated as possible. He had already completed his puppy vaccinations and received his first rabies vaccine at approximately 1 year. But we were determined not to further vaccinate and to use titers if necessary.

Unfortunately our state required yearly rabies vaccines, so those were given at a rabies clinic each year. When we did board him for our yearly vacations at a nearby veterinarian clinic, they accepted his rabies certificate as ?proof of yearly vaccinations? without questioning which ones he had received. They did insist upon bordetella, however, as did every boarding facility in the area. We felt it was a minimal price to pay for avoiding all the regular ?boosters? they might want to push on us, so we did allow them to administer that one.


The year that Duncan turned six, however, began the downfall. He received his yearly rabies at a local rabies clinic and shortly thereafter began to itch and chew his front feet. This was followed with a rapid loss of weight, and increase in appetite and lethargy. He also developed crusty sores on his body, particularly his ears. We worked with him by giving herbal supplements, homeopathy and the probiotics. Just a few weeks later as he was beginning to show some signs of improvement, we took him to his regular boarding facility. This time, they told us they had examined our records more fully and could not accept him for boarding unless we could provide proof of a DA2PP and bordetella. We tried to explain that he was just getting over a reaction to his rabies vaccine, but were told he could not stay without the vaccines being administered while he was there. As we were literally walking out the door for our departure, we had no choice but to accept the vaccines or cancel the vacation.


Those vaccines were the limit of what his immune system could process. When we returned in 6 days, Duncan seemed none the worse. But after a few days home, the intense itching returned, along with profound hair loss. He had what I term ?anxiety attacks? , more weight loss, excessive thirst and began to lose his balance. A few weeks later his eyesight began to fail and he became incontinent.

After a detailed consultation, we  began working with a pro-biotic regime with Nzymes.com ?but it was too late. Duncan?s systems were just shutting down one by one and by late December he was gone. 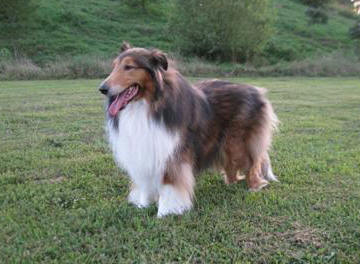 Above, a normal, healthy looking Duncan, and below, the damage done by over-vaccination 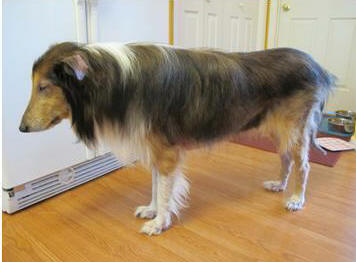 Duncan is but one of countless thousands of dogs and cats who have suffered and died as a result of over-vaccination.  My heart breaks for him and his family, and all those who have lost a pet this way. I have seem cases so similar to this, as well as ones were dogs exhibited a huge change in behavior after a rabies vaccination.  They usually go from a happy, confident type dog to a fearful, aggressive type within days or weeks of getting the vaccination.

If you would like to read more on this topic, this is a good place to start:

(If the links don't work when you click on them, cut and paste into your browser.)

I also want to say I am not totally against vaccinations.  I just want people to really do the thinking as they decide what to allow their dogs and cats to have.  One reason I will never board my dogs is so I can avoid the mandatory over vaccination required.  I do the minimal ones that are most important, mainly rabies, distemper and parvovirus, and at a reduced schedule, meaning NOT every year.  Thankfully I live in a state that allows the rabies vaccine to be given every three years.  Many places allow a titer as well and that is highly recommended instead of vaccinating.  Most dogs have full immunity for life after just one or two rabies vaccinations, so all those extra annual ones just do harm to the animal.  Once immunity is at 100%, further vaccination just does damage, not help.

I hope that this gives you pause as you decide what to allow your for beloved pets.  You may have to change vets or stand up to a vet who wants to push more on your pet than is safe or necessary, but please DO stand up!   There is compelling research showing how much damage vaccines can do, they are NOT harmless and should not be given without seriously weighing the consequences. If you vacation and can't take your dogs, consider using a pet sitter rather than a boarding kennel, so your dogs don't need to have unnecessary vaccinations. It is my prayer that as more and more owners get this information, there will be a change in thinking at kennels and with veterinarians, and our companion animals will be safe to live long, healthy lives!

I also wanted to include a link for a similar topic, the dangers of flea and tick products.  These products are not safe either, and it is wise to consider their use at all. I avoid them on my own dogs as I will not willingly apply poison to them.  Being raw fed and minimally vaccinated, their immune systems are strong and that makes them less appealing to parasites.